As with all property owned by and leased to Trinity House Southwold Lighthouse benefits from our stringent maintenance programme. Last year Southwold Lighthouse came up for its planned maintenance review for external redecoration, the tower was still in good condition with the coating just beginning to dull off but had not yet gone chalky. We gave it another year of service and decided to redecorate this year before the coating started to delaminate. As with all decorations the substrate has to be sound as the new paint is only as good as the backing to which it is applied.

Southwold Lighthouse is a prominent and much cherished feature of the town of Southwold. The lighthouse has been shining its light out to mariners since 1890, when it was built under the supervision of Sir James Douglass to replace three other local lighthouses. The main light has recently been upgraded to provide a greater range, 24 nautical miles, due to the loss to the service of Orfordness Lighthouse.

Due to the position of Southwold Lighthouse it was decided that the tower would have to be scaffolded and netted to allow the tower to be pressure washed without the cottages that nestle up to it being covered in water and to keep the paint flakes on site to be bagged up and disposed of. Erection of the scaffold caused a delay to the project as we have had the windiest summer for two decades and scaffolders are forced to stop work if the wind gets too fierce, and you will appreciate that towards the top of a lighthouse the breeze picks up a bit!

One of the problems from which Southwold Lighthouse suffers is the local starlings finding it
a good place to roost. This leads to the gutters becoming full of guano and the contaminated water running down the tower leads to a bloom of mould every summer that can be seen in the accompanying photograph. This mould is very tenacious and cleaning it off causes additional stress on the coating. In the past an electrical tape system had been fitted to the lantern and dome but this was found to interfere with the reliability of the main light, so this year it was removed along with the mass of silicone adhesive used to hold it in place. Currently we are trialling a clear bead of bird repellent gel that we hope will upset the birds’ nocturnal sleeping arrangements.

Products that we use to decorate our lighthouses are always the best that we can find on the market for our application. Towers are frequently over 150 years old and sometimes far older. In the past the coatings have been less protective and this has led to the fabric of the towers being saturated with salts from the salt laden damp air. The products that we use have to be capable of letting this dampness escape while keeping out the weather and reflecting the sunshine. When we pick a new product it undergoes a long trial period as we cannot afford for the product to break down or maybe, even worse, fade so that we are left with a pink lighthouse.

The current product of choice is Mathy’s range of external paint including their Murfill that we use on the tower which has an elasticity of 400% so any slight cracking of the render or block joints does not lead to water ingress. Metal work at the top of the tower is equally difficult to protect as a variety of differing metals were used to construct lanterns. We use Mathy’s Alkythane that produces excellent results, even in the damp situations that we encounter, while it needs fewer coats than other systems, there- fore there is less build-up of paint over the years and quicker application can be achieved.

With the care and attention taken during this year’s painting we hope that our lighthouse is now set to shrug off the worst that nature can throw at it for the next decade. 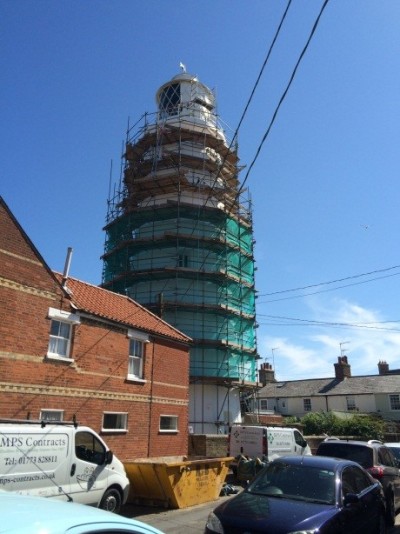 Scaffold in place at Southwold Lighthouse 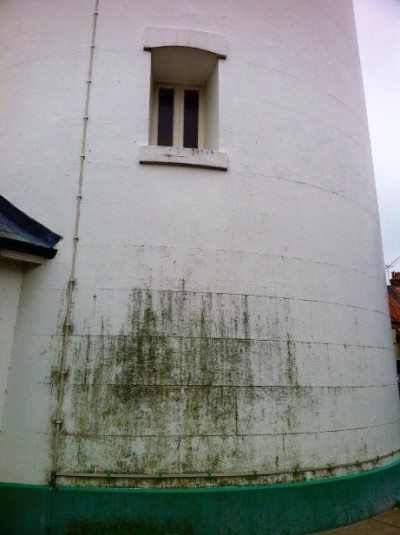