‘What’s the point of sending an HR Manager out to visit lighthouses?’ you may ask. Well, finding out what and how we do things and some of the challenges we face provides really valuable insight to not only support familiarisation in the role but a greater understanding of the organisation and its people.

Simon Millyard, Engineering and Operations Manager and I arrived at St. Just bright and early on the morning of our visit. A misty start meant that our planned departure out to Longships Lighthouse was delayed and the onward trip to South Lundy was also in doubt. However, the weather cleared and it was helpful to have been able to spend the extra time with the team who were in the office at St. Just.

The flight out in the helicopter to Longships was less than ten minutes and landing on the top of the lighthouse was amazing, definitely one of the best things I have ever done

Following our safety briefing, Simon, Malcom Johns and I heaved ourselves into our flight suits—well I did! Top tip, if you have long hair, tie it up before you try and pull the flight suit over your head! The flight out in the helicopter to Longships was less than ten minutes and landing on the top of the lighthouse was amazing, definitely one of the best things I have ever done. It was a privilege to witness the engineering prowess of the original designers and builders of the lighthouse and how our engineers are continuing with those high standards. Experiencing first-hand the challenge of getting equipment into the lighthouse and managing the ladders and stairs, not to mention the constrained living conditions was also invaluable.

We spent an hour out at Longships and headed back to St. Just for a Cornish pasty before Simon and I jumped back in the helicopter for the 50 minute flight up the coast to Lundy South Lighthouse. Some of the team from St. Just were there working and gave us a tour of the site. A different set up here on beautiful Lundy Island, with the old lighthouse keepers’ cottage providing single room accommodation rather than the shared ‘banana bunk room’ in a rock station.

A short flight from South Lundy took us to a heliport near Barnstaple from where we took a taxi out to the third lighthouse of the day. Instow Front and Instow Rear lighthouses provide a leading line for vessels entering the Taw and Torridge estuary. Again the Trinity attention to detail that I had quickly learned to expect was apparent with immaculate wiring inside the well-kept but small building.

At four weeks into my role it was perfect timing for a visit that allowed me to immerse myself in the culture of Trinity House. I was able to see how things have evolved, how our heritage and history plays such an important part in our present day culture and that the incredibly high standards we work to are a really important part of that; carrying on the tradition but also constantly looking to the future and embracing change that enhances that journey.

Oh and the fourth lighthouse? A well-earned half of the aptly-named Wolf Rock when we finally reached the hotel at around 8:00 pm! Jenny Dines and Simon Millyard on top of Longships Lighthouse 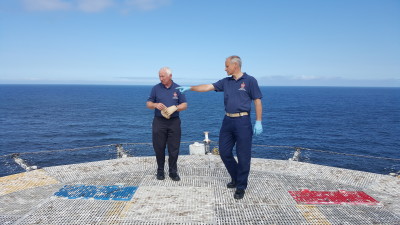 Simon Millyard and Malcolm Johns on top of Longships Lighthouse

A career on course