Longstone Lighthouse is one of Trinity House's most iconic lighthouses. It was built in 1826 by Joseph Nelson and originally called Outer Farne Lighthouse. The lighthouse is known for the 1838 wreck of the Forfarshire and the role played by Grace Darling in the rescue of its crew. As a result the lighthouse has national heritage and historic interest.

The lighthouse has undergone many changes from that time; the current accommodation was built in 1951 on the former site of the fog signal house that had been destroyed by bombing in 1942. The lighthouse was electrified in 1952 and was automated in 1990 with constant running diesel alternators providing power for the aids to navigation and the domestic supplies.

A project to re-engineer the lighthouse is now underway and will address the reality that the majority of the electrical equipment within the lighthouse is now obsolete. The work will reduce the risk of future failure and reduce the maintenance overhead on this station. This project will also reduce the reliance on the diesel engine generators and significantly reduce the carbon footprint for both power generation by diesel alternators and delivery to site of diesel fuel.

The power for the lighthouse will now largely be supplied from renewable energy, produced by a solar panel system mounted on the roof of the accommodation building

This can be achieved due to the new lantern and electronics available. The current lantern consists of a small 3rd order twin spectacle lens with two 1000Watt light sources acting as a main and standby. The lens currently rotates giving a 24 nautical mile light throughout 24 hours. Following a navigational review the light range can be reduced to 18 nautical miles – night time only. A Trinity House standard light source developed by Research & Radionavigation will be used to replace the current 1000 Watt light source; this significantly reduces the power required making the solar panels a viable option. The additional advantage is that the new light source does not need to be changed on a regular basis and therefore reduces the maintenance burden on the station. Station electronics and aid to navigation control equipment will also be completely replaced using a Trinity House standard solution used at other lighthouses.

The installation phase of the project is now well underway and started in April 2015. During that month Trinity House Vessel Galatea deployed a lightvessel to the north of the light- house to act as a temporary aid to navigation while the project progresses.

THV Galatea and the Trinity House helicopter were then used to transport the equipment and tools to site. The station is located within a highly designated environmental area and as such the project team have followed advice from Northumberland County Council and Natural England in planning these activities in order to cause the least disturbance to local wildlife in the area.

Since the work started in April a team of five have been present, living on the station and being rotated on a three week basis. The team of technicians mostly from the Field Operations department within Trinity House have successfully installed the equipment in accordance with the design specified by the project team to a very high standard, which will enable the lighthouse to continue with minimal maintenance for a further 20 years within the harsh environment of the North Sea. Installation at the light- house now nears completion with a Go-Live date planned for 11 November.The solar power system, navigational light and control electronics have all been installed and the commissioning of the aid to navigation and its related systems will now commence.

Safety of personnel and public at the station is our main consideration and while the work is on-going the site is designated under CDM (Construction Design and Management) regulations and therefore the visitor centre at the lighthouse has been closed for this year.

Part of the work during 2015 has been to prepare a new upgraded visitor centre throughout the tower and in the lower level of the accommodation block.This will include new displays and updated information regarding the station and Trinity House and will be ready for re-opening in April 2016. 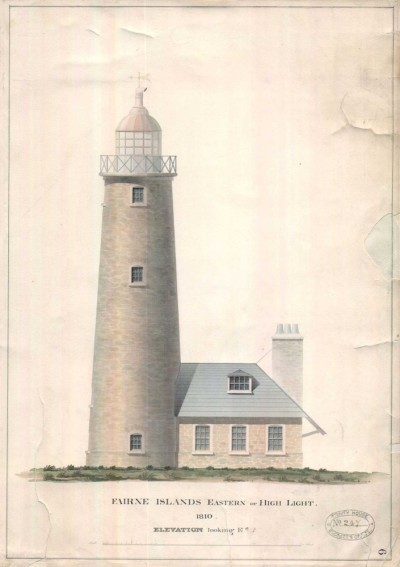 An illustration of Grace darling c.1838

Sail out to this isolated lighthouse in the rugged Farne Islands, the setting for Grace Darling's famous heroics in 1838