For those of you wondering what the holiday period meant for lighthouse keepers, the following festive account is reproduced from Trinity House’s Flash magazine of 1987.

Mr. Bluer’s tale was first published in September 1986 by A & C Black in their children’s classic A Christmas Tinderbox.

It is the middle of December and a gale is blowing. The sky is dark although it is mid-day and the sea is the colour of lead with long white streaks of windblown spume scarring the surface.

The sort of day to put some more coal on the fire and curl up in front of it with a book if you do not HAVE to go out.

But there are people who DO have to go out and the keeper returning to the Lighthouse is one of them.

His period of leave is over and he huddles in the shelter of the buildings at the tiny airfield waiting for the sound of the approaching helicopter above the howling wind.

Eventually the helicopter comes into view its navigation lights flashing and twinkling in the gloom. Lower and lower it descends, facing the buffeting wind until it lands, not too far, from the waiting Keeper and his trolley loaded with boxes of stores.

This year he will be spending Christmas at the Lighthouse with two colleagues already out there and the boxes contain all the food they will need for the next month together, with some ‘extras’ for Christmas Day.

Once all the boxes are stowed into the cargo space of the helicopter the Keeper climbs in through a side door and sits on a bench seat behind the pilot and engineer. The rotor blades spin faster and faster and the tiny helicopter is in the air once more and is immediately blown sideways with the force of the gale but the pilot skilfully corrects the course and heads for the “Tower” some six miles further out in the Atlantic Ocean. After a few minutes flying they see it.

It looks very like a tall factory chimney standing all alone in the sea but with a lot of scaffolding around the top. As they get nearer the ‘scaffolding’ is revealed as a strong steel structure supporting a platform on which the helicopter will land. The platform doesn’t look very big but as they approach they see that it is quite large enough for their helicopter.

After landing all the boxes are unloaded and lowered through hatches in the landing platform to the Keepers waiting below. When all this has been done the Keeper going home climbs into the helicopter taking the place of the Keeper reporting for duty. A quick wave from the pilot and the helicopter zooms up and away, heading for land again.

On the Lighthouse the Keepers begin the task of emptying the boxes and stowing away the meat in the freezer or the ‘fridge. As they do so they are chatting eagerly and passing on the latest bits of news from ashore and from the other Lighthouses. Then, as they open one box, they find a letter inside. It’s from the local Round Table/Rotary Clubs informing them that this is a hamper donated specially to the Keepers who will be away from home this Christmas.

Apart from a plump fowl they find a big cake and a super box of crackers. Everything else in the hamper is in threes… three tins of fruit, three small Christmas puddings, three net ‘stockings’ of oranges, apples and nuts, and so on ensuring that each man gets an equal share of the ‘Goodies’. This may not be the only ‘present’ the Keepers get because sometimes the local Church will send out a hamper and occasionally Lighthouses get “adopted” by Guides or Brownie Packs or schools who will send letters and cards to let the Keepers know that they will not be forgotten.

It looks as though the Keepers will have a splendid time after all because, of course, they have all got presents from their own families too.

But, in the meantime, the work of the Lighthouse must go on.

Every morning when the sun is above the horizon the light is extinguished and heavy curtains hung down the interior of the lantern to protect the ‘Optic’ from the sun. The Optic is a series of very strong lenses some six feet in diameter mounted in a bronze and steel rotating framework weighing about two and a half tonnes. It is massive and as soon as the curtains have been hung the Keeper sets to dust and polish it and oil the machinery and generally see that all is ready for lighting up later that evening.

Different days bring different tasks designed to keep the Lighthouse in tip top condition. One day is given over to washing the glazing… the ‘windows’ of the lantern… and although the insides are easy, it is a different matter when the Keeper has to clean the outsides, one hundred and eighty feet above the sea!!! Then there are the engines and electric generators to clean and overhaul so that they are ready for use at a moment’s notice.

Every day the floors will be swept and washed all the way down from the lantern to the entrance door… eight flights of curving stairs down!!

Only when the Keeper has finished all his routine duties is he free to spend time on his hobby or even just reading. Nowadays every Lighthouse has radio and colour television but keepers still will often spend time together playing games like Chess, Cards or Dominoes.

Christmas time is the time when they really ‘get-together’.

A couple of days before Christmas they put up a few streamers and decorations in the Sitting Room and display all the cards they have received and, from the cupboard under the stairs, they retrieve the old plastic Christmas tree that they have had for years. A few baubles and bits of tinsel and the room takes on quite a festive air.

All at once it is Christmas.

At breakfast the Keepers greet each other and exchange little gifts then, as soon as breakfast is over start to unwrap the presents from their families. There are “Oooh’s” and “Aaah’s” and “Blow-me-Downs” intermingled with the laughter as the brightly coloured wrapping paper covers the floor.

Over the extra cup of coffee they sit silent and their eyes glaze a little as they perhaps picture their own children opening presents under the Christmas tree at home.

“Come on… Shift yourselves!” calls one Keeper. “Can’t sit ‘ere all day”. He is ‘Cook-of-the-Day’ today and there is a bird to get in the oven, a pudding to steam, potatoes to roast and sprouts to boil and a hundred and one things that go towards dinner on Christmas Day.

The other two leave the Kitchen and take the opportunity to telephone home their “Merry Christmasses” to their respective families.

Christmas dinner is superb. The bird is done to a turn, the stuffing mouth watering. The ‘taters are brown and crisp and the pudding with Brandy Sauce… Mmmm.!! They really enjoy it and pretend not to notice the pile of pans and dishes in the sink waiting to be washed up.

Eventually when every cup is back on its hook and every pan In its place in the rack the Keepers retire to the Sitting Room where they will relax for a while. Coloured paper hats are donned as they pull a cracker or two. Then out come the ‘once-a-year’ fat cigars that seem to signify Christmas to a lot of men… and possibly a glass of home-made wine as they sit back and watch the Queen on the ‘telly’.

After the Queen’s Speech they jump up and turn on the radio transmitter. It has been a tradition ever since radio was introduced that, on Christmas Day afternoon, each Lighthouse will, on a special frequency, call up the neighbouring lights … some may be up to a hundred miles away… and in turn will serenade each other with a Carol or two that they have rehearsed. How the families ashore enjoy it, for they too have been listening in on the radio back home and for a few minutes the Keepers do not seem too far away after all.

But soon the reality of their position is brought home to the Keepers again as the approaching dusk tells them it is time to ‘light-up’. The Keeper on duty will go down to the engine room near the base of the Tower and starts up one of the powerful diesel engines that powers a large electric generator. When everything is running smoothly, he toils up the stairs again all the way up to the lantern. There he takes down the heavy protective curtains, switches on the electric motor to rotate the Optic then, after testing the ‘Standby Lamp’, throws the switch to light the ‘main’ lamp of some 3,500 Watts. The blinding light is magnified by the lenses in the Optic and rhythmic, monotonous spokes of light are revolving out over the sea. All night the five million candlepower beams will signal to passing ships the location of the lighthouse and signpost a safe passage for them.

In the Kitchen the kettle has boiled again and a pot of strong tea is brewed. The remainder of the bird is eaten, the cake is cut and shared out with a bowl of fruit and cream for each man.

After tea it is back to the Sitting Room again for more crackers and nuts and television for the rest or the evening… except for one man. He is on duty and often must leave the room to check the light… the engines… the visibility for even the slightest gathering of mist will alert him to prepare the Fog Signal machinery.

Hopefully that will not be necessary but he notices that the barometer is reading lower and they may be in for another gale. “Ah well!” he thinks; “We aren’t going anywhere for a while anyway and here inside the Lighthouse we are warm and safe.” “I’m Cook-of-the-Day tomorrow, Boxing Day, and there’s that Leg of Pork and Parsnips and Apple Sauce.” 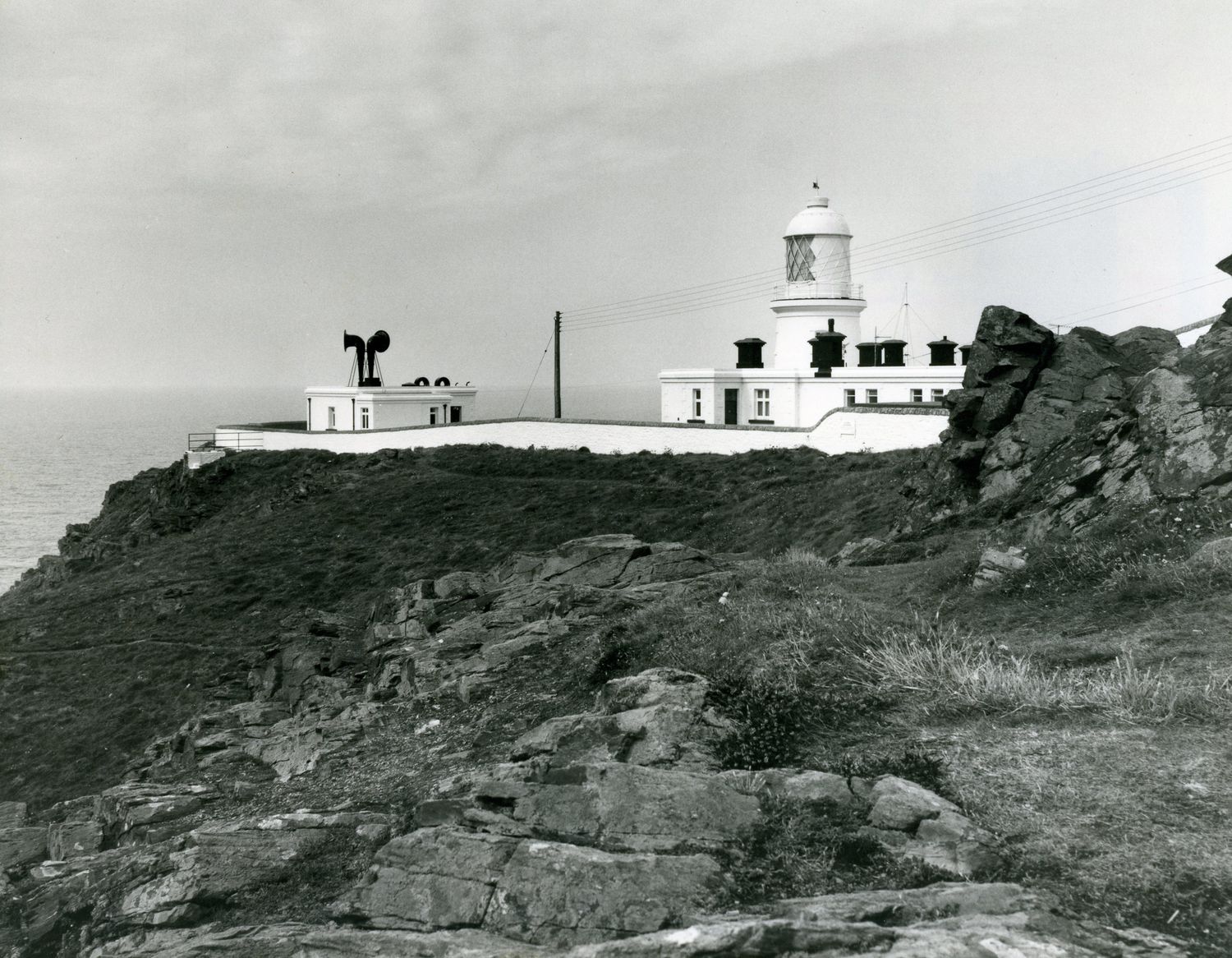