Before Trinity House was formally incorporated in 1514 and charged with regulating pilotage on the Thames—before Trinity House was even known by that or any other name—we were a benevolent fraternity with a self-appointed duty to care for distressed mariners and their widows or dependants. That fraternity—what we might today call a charity—was based at Deptford with a great hall and 21 almshouses to its name. Almshouses would in time become a major part of the Corporation’s charitable works, although that fact is somewhat obscured today as the Trinity House Maritime Charity extends itself to so many other diverse projects and causes.

For a long time, though, providing homes for aged and needy mariners and their families was a concentrated effort by the Master, Wardens and Assistants (commonly ‘the Elder Brethren’) of Trinity House.

Since it was first incorporated, the Corporation has bought, inherited, built and maintained a number of properties and lands for their benevolent purposes; there have been too many to describe properly here, but chief among the historical properties are the following:

This land, on which the original almshouses at Deptford were built, was in the possession of the Guild before its incorporation by Henry VIII in 1514; the hall and almshouses which formerly stood on the site were built in the 15th century for “decayed Masters of Ships and their Widows.” This triangular plot of land was situated in the Stowage at Deptford, not far from the river. The original almshouses and great hall of the Corporation were demolished and rebuilt in 1660; by 1788 they had become ruinous again and were taken down and again rebuilt on the same site. The residents were removed from these houses about 1863 and the premises were let. Many coloured glass panes from the hall with merchants’ marks survive as the only record of the early Masters and Wardens of the Corporation, and today adorn the windows in the library at Trinity House. Nothing of the Deptford estates remains today.

This is the ground on which 38 almshouses were erected circa 1671, on three sides of a one acre quadrangle. Captain Richard Maples (d.1680) left to the Corporation £1,300 with which a hall and 18 additional almshouses were built, completing the quadrangle. the almshouses would stand until 1866, when they gradually fell into disrepair; the residents were gradually vacated and the site let out in 1875.

In 1695 28 almshouses and a chapel were built to accommodate the growing ‘brotherhood’ of mariners. Besides the accommodation, a money allowance, coals and other comforts were given to the residents. The original 28 dwelling houses ran down each side of a quadrangle, with a chapel at one end; later the quadrangle would be extended into a ‘T’ shape. The interior of the chapel contained the painted glass panes which survive alongside the Deptford panes in the Trinity House library. Counting the almshouses at Deptford and those at Mile End together, the Corporation possessed 93 in the year 1730, 111 in 1770 and 144 in 1815. By 1893, however, the almshouses at Deptford had been pulled down and a system of pensions established in their place.

Christopher Merrick was a Merchant of London, who “having considered the necessity there was for the encouragement of Navigation and Shipping of this Kingdom and to the intent that there might be some further encouragement for Seamen and Mariners in their Adventures by Sea by way of Merchandize Fishing or other way or imployment that should be found good and necessary and for the benefit of the Kingdom and for the special trust and confidence he had in the said Brotherhood,” agreed in January 1660, to convey this estate to the Corporation for £1,694.

The Estate was conveyed to the Corporation “to the intent… that the Rents and Profits should… for ever thereafter be laid out paid… bestowed and expended… for relieving comforting easing and maintaining of the poor aged sick maimed weak and decayed Seamen and Mariners of this Kingdom their wives children and widows where most need was or should be conceived in the judgment…of the… said Brotherhood.”

Located a short walk from London Bridge in Southwark, the Newington Estate was renamed Trinity Village in 2008; the income derived from its 400 households is a major contribution to the charity’s fund.

This land came to the Corporation under the will of Captain Robert Sandes in 1720, with a trust for poor seamen, their widows and orphans. The estate now totals 565 acres of farms and outlying pastures, and neighbouring village Goxhill.

A Court Minute dated 18 June 1661 shows that harmony did not always reign at the almshouses:

“The Elder Brethren then present were desired by the Master that everyone of them would betwixt this and Saturday next consider what was requisite to add to the By lawes of the Corporacon, The Master Wardens and Brethren having been informed that there is not that love and good agreement amongst theire Almswomen at Deptford as ought to bee

And the reason to be in regard five of the said Almespeople have but five shillings per month and the other seaven hath ten shillings per month wch. hath caused animosities and undervalluing one another. To prevent wch. and that they may live as they ought to doe in love and peace,

It is thought fit and ordered, That those five new Almeswomen who recd, formerly five shillings a Month shall for the future tyme receive ten shillings a Month as the other seaven doe, and soe in all gifts and payments according to custome or otherwise, there be an equall proporcon amongst them,

Ordered, That they have notice thereof and be admonished to live together in love and peace as is meett they should least the offenders doe incurre the displeasure of this House.”

CHANGES TO THE CHARITY’S GIVING POWERS

As the 19th century saw the swelling merchant marine send greater numbers of men out to sea, the need for welfare, almshouses and pensions for decayed seamen and their widows rose accordingly; by 1845 there were 8,766 pensioners under the care of Trinity House. But the 1853 legislation to regulate the Corporation’s accounts had a significant impact on the charity’s giving powers: in 1852 the pension outgoings were £36,000, but by 1855 were reduced to £9,000.

At the turn of the last century, a number of various gifts and legacies were in place to support the charitable works, such as the gift of a former Master of the Corporation, of the Dagger House inn in Limehouse, bequeathed in 1632, on the condition that the Brethren distribute £5 to the poorest seamen and their dependants at Michaelmas; this donation had risen by 1929 to £11. Or take as example Mangles’ Legacy, so that the Brethren may distribute bread to the poor of Stepney, or Mortimers’ and Stevens’ legacies, for sending boys out to apprenticeships at sea. These various legacies were consolidated into the Trinity House Maritime Charity in the 1990s.

As a reminder of its oldest function, in 1958 the Corporation built the Walmer Homes almshouses in Kent, replacing the war-damaged homes at Mile End. The 18 homes for aged and distressed seamen and their dependants remain today.

On 9 May 1958 HRH The Duchess of Gloucester opened the new homes, which had been built to replace those at Mile End which were damaged beyond repair in the Second World War. The provision of almshouses for retired mariners is one of the central objects of Trinity House’s charitable goals and predates even our 1514 Royal Charter; before 1514 we had 21 almshouses and a hall at Deptford, which were added to from time to time by charitable bequests of members of the Corporation and others; and in the 17th century many more were built on the estate at Mile End.

As the homes at Mile End were so seriously damaged by enemy action and that—since they were first built—the locality had been largely industrialised, the Elder Brethren decided to find a site in a position more suitable for elderly retired people than central London. The present site in St. Clare Road, near Walmer Castle and not far from the sea, was eventually considered the most suitable.

The construction of the new homes began in January 1957. A Flash article from the time reports that “The Homes consist of fourteen single floor houses erected as three sides of a square with a two floor block in the centre of the St. Clare Road frontage… Each house contains a Living Room and two Bedrooms, a Kitchen, Bathroom and usual offices. The Kitchens are fully equipped with sink units and a gas cooker, and the Bedrooms have built in wardrobes. The Homes are centrally heated and designed with every modern convenience in order to provide the maximum comfort for elderly people with the minimum of housework.

“The upper floor contains a very fine Common Room or Library with a large television set and sound radio for the use of the residents. A self-contained flat for the resident Matron is also on this floor… The main entrance to the buildings has been adorned with carved stones bearing the illuminated coats of arms of HRH The Duke of Gloucester [then Master of Trinity House] and of Trinity House itself.”

In a speech recorded for radio and television by the BBC, the Duchess—in her capacity as the wife of the Master—said they were very fine homes which would set a high standard, not only for today, but for many years to come.

Applicants for homes must be a mariner—or the widow of a mariner—who has had over 15 years' service at sea; has held a recognised certificate of competency or service as a Navigating, Engineer or Radio Officer or other Mariner Qualification which the Trustees may determine; must be aged 60 and above, able to prove financial need and must be self-caring in all important respects.

Today the charity works to continually update the grounds and bungalows to improve the lives of the residents, and looks for new residents to welcome on site. 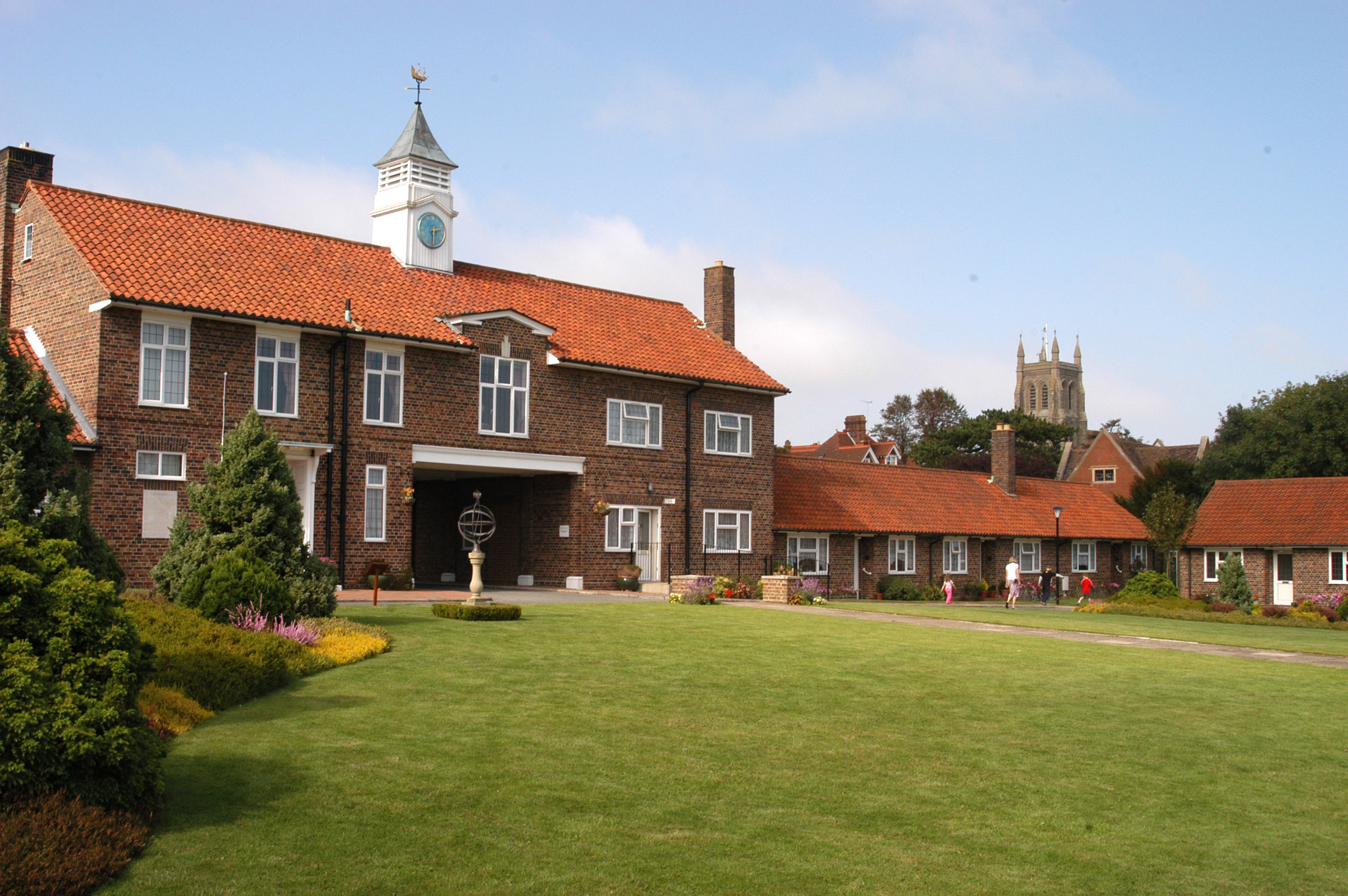 As part of our oldest duty, Trinity House provides 18 almshouses in Walmer, Kent, for the welfare of aged mariners and their dependants

The Corporation of Trinity House of Deptford Strond has a long and interesting history, which begins (officially) in May 1514