After more than 50 years of reliable service as an aid to navigation, Trinity House turned off Royal Sovereign Lighthouse on 21 March 2022 at the end of its serviceable life.

Royal Sovereign Lighthouse was built in 1971 with a design life of 50 years. Having monitored the fabric of the lighthouse over the last decade and observing the expected signs of deterioration, Trinity House concluded that the ongoing safety of the mariner required that the structure be decommissioned.

The project to decommission the station was announced on 28 June 2019. At that time, Trinity House’s Deputy Master Captain Ian McNaught said:

“It is never an easy decision to discontinue and even remove such a prominent aid to navigation, but our first priority will always be the safety of the mariner. Now that Royal Sovereign Lighthouse has reached the end of its serviceable life, it is time for us to take steps to ensure that the lighthouse itself does not become a hazard. There will be a lot of work involved for our engineers and our various other teams and we will be working extensively in collaboration with a number of organisations to ensure the success of this project.”

In anticipation of the removal of Royal Sovereign Lighthouse, Trinity House upgraded nearby Beachy Head Lighthouse; it also increased the capability of the offshore CS2 buoy and retained the nearby Royal Sovereign buoy. The upgrade to Beachy Head Lighthouse increased the number of solar panels around the base of its lantern gallery and installed a longer-range LED lantern; the CS2 lighted buoy will also benefit from an increase in range.

Royal Sovereign Lighthouse was brought into operation at noon on 6 September 1971.

The lighthouse is of concrete construction and was built in two sections on the beach at Newhaven. The base and vertical pillar section were floated into position and sunk on to a levelled area of the sea bed; the upper cabin section and superstructure were then floated over the pillar section. The pillar had an inner telescopic section which, when attached to the cabin, was jacked up 13 metres and locked into position.

From the winter 1972 edition of Trinity House’s Flash journal:

“After long delays during building, caused mainly by the unpredictable weather and various technical problems, the lighthouse was officially brought into operation at noon on 6 September, 1971. The commissioning ceremony was performed by the then Deputy Master, Captain Sir George Barnard, and was attended by other Board Members, Senior Officers, representatives from the Consulting Engineers, Contractors, the Department of Trade & Industry, the Chamber of Shipping and Civic and Public Organisations. With a farewell blast from the lighthouse's diaphone fog signal, THV Winston Churchill towed away the Royal Sovereign lightvessel, the last of the lightvessels which have marked the station since 1875.

“The navigational light is provided from a 100W electric filament lamp, in conjunction with an AGA Catadioptric lens and has a clear weather range of 26 miles. The fog signal is a Stone Platt Omni-directional Diaphone with a range of 4-5 miles, and is powered by two diesel compressors, whilst power for the light, radio beacon and domestic needs are supplied by four 20kW diesel generators.

“The lighthouse is relieved monthly by helicopter. If sea conditions permit, access can also be made by a ladder or by using a crane and basket.

“The cost of building the Royal Sovereign, over £1½ million, was considerably higher than expected. The whole civil engineering project however, incorporated many novel features in a hostile environment in which the engineering field is still a long way behind that of land work.”

On Tuesday 30 July 1974, HRH the Duke of Edinburgh visited Beachy Head and Royal Sovereign Lighthouses in his capacity as Master of the Corporation of Trinity House.

HRH Prince Philip flew and landed a Wessex Helicopter from the Queens Flight on to the Royal Sovereign Lighthouse helicopter platform. He spent an hour aboard Royal Sovereign Lighthouse and not only inspected the lighthouse in great detail but was obviously very interested and impressed by all he saw aboard the 'lighthouse of the seventies'. After the inspection, Prince Philip flew into Eastbourne by helicopter and transferred to THV Patricia which took him out to Beachy Head Lighthouse where he carried out a similar inspection.

Before turning off the light, Trinity House’s multi-function tender THV Galatea laid four cardinal buoys around the lighthouse to mark the hazard while works take place to remove it.

The light was turned off remotely by Trinity House’s Director of Operations Commodore Rob Dorey in the Planning Centre at Harwich, Essex.

The next day, the Field Operations East team flew to the lighthouse to physically decommission the aid to navigation equipment and carry out preparatory works in advance of the removal of the station by contractors.

At the time of decommissioning, Royal Sovereign Lighthouse had the following particulars. 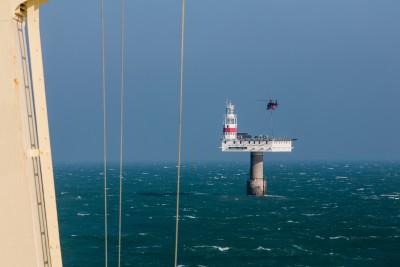 Helicopter operations from THV Patricia in 2017 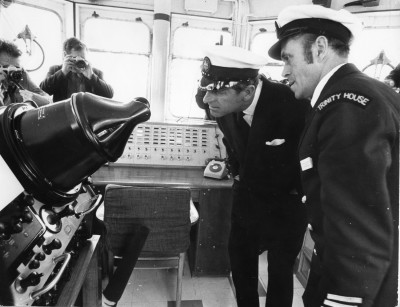 Royal Sovereign Lighthouse to be decommissioned