Many will be aware of the role, but few will have met the Inspector of Seamarks. I have a desk within the Navigation Directorate at Trinity House, London, but my days are spent on the road visiting all the local lighthouse authorities, ports, harbours, rivers, estuaries and beaches taking in every nook and cranny of our shores, from Northumberland all the way around the coast of England and Wales to Cumbria, including trips offshore to all the oil rigs of the Southern North Sea and the ever growing numbers of windfarms. Every year over 11,000 individual aids to navigation are inspected, taking in over 21,000 miles of driving and 35 weeks on the road.

To achieve this task, I find myself engaging with a wonderfully wide and diverse range of people, embarking on all forms of transport to view aids to navigation, finding myself in extremely odd places and on more than one occasion raising the suspicions of the long arm of the law.

Like painting the Forth Road Bridge, no sooner have I finished my year’s programme—the data collected and collated by the Navigation Directorate, the annual report written—then I begin planning my next year’s travel. With my diary programmed and the previous year’s report on the Director of Navigational Requirements’ desk, come February I’m on the road again.

I have collected together a few of the interesting and more unusual things that occur during my travels those, to highlight the diverse, the unusual and simply odd stuff that the Inspector of Seamarks finds himself dealing with.

Every year over 11,000 individual aids to navigation are inspected, taking in over 21,000 miles of driving and 35 weeks on the road

Fire fighting on the River Dart

Following an early breakfast I’m down on the jetty in front of the Dart Harbour Commissioners Office at 07:30, ready to catch the rising tide for the day’s inspection of the River Dart. With my inspection papers at the ready, we set off and begin the process reviewing and commenting on the navigation marks in the river. As we arrive up in Totnes some two hours later, I quietly reflect that we will be back in Dartmouth in good time for me to get the ferry and drive to Brixham for my next meeting that day. But as we set off on the return journey, clouds of smoke are seen billowing from the quay ahead of us, a small boat has just launched, only for his engine to burst into flames; suddenly our trip is turned into an emergency response as the Harbour Master shifts into an ‘action man’ role, coordinating support for the fire brigade as we help move the rapidly sinking boat to a safe jetty. Needless to say my timetable is now hours out; I phone Brixham to make my apologies. With that evening’s lights inspection to follow it proved to be another very long day, eventually getting back to my hotel long after dark.

Plymouth and a brush with the law

Early evening, dusk is falling. I’m waiting for the lights to come on across the river at Saltash Town Quay, having found a perfect vantage point under the Tamar Bridge. I can also see what will be the navigation lights on the bridge buttresses, and the most important ones I seek: the lights marking each end of the Ernesettle Royal Naval Armaments Depot loading jetty for the Devonport Naval Base. As ever I find myself on site a little early waiting for darkness to fall, looking out with my binoculars willing those lights to come on. It’s at this time that the Military Police arrive, asking me what I am doing looking so intently at the armaments jetty, asking for proof to corroborate my reasons for looking so suspicious! I suggest they call the Devonport harbour control, or Trinity House Planning Centre at Harwich, any of whom will verify my credentials; an hour or more passes before they are satisfied that I am genuine, by which time the lights were flashing brightly, albeit without, I might say, those of the armaments jetty, which were subsequently reported as extinguished, at least justifying my time spent with the Police.

The River Ouse and unusual activity at Drax power station

The River Ouse inspection is conducted by driving 15 miles up and down each bank between Selby and Goole. I was warned by the local Harbour Master that in order to gain access to the Drax loading jetty, we would need to go through a somewhat labyrinthine security clearance process at the power station main gate; this achieved, we were eventually on our way down towards the river, a narrow road running in the opposite direction away from the power station, twisting and turning through the fields. We turned the final corner and were confronted by what can only be described as a scene from Close Encounters of The Third Kind—lights, vehicles and people everywhere—which turned out to be tractors working nights on the potato harvest, immediately next to the gate we needed to undertake the jetty lights inspection. I wondered if those farmers had gone through the same security clearance problems we’d had…

Getting out to the inspections

As you might imagine, navigation marks can be notoriously difficult to access. In addition to ships and the usual pilot and survey boats—not forgetting many long muddy walks along clifftops and river banks—I have travelled on an odd variety of transport to get to my inspection: a fish farm tractor, a Second World War landing craft, yachts, speed boats and a 4x4 sand buggy. I’m still waiting, however, for a Harbour Master to offer me a ride on a hovercraft or helicopter.

Having a face to face relationship with such a varied customer base is clearly an important part of my job and a fundamental public relations role for Trinity House; the most noteworthy may be the 92 year old Harbour Master in the quaint Cornish harbour of Polperro. As I arranged my appointment with him I was told in a broad Cornish accent to walk down through the village (no cars) to the harbour, where he would be sat on the wall by the post office waiting for me. True to his word there he was; he set off with his sticks to lead me along the coast path, out through the village and up over the rocky cliff top path, regaling me with interesting anecdotes and tales of days gone by. Finally descending the steps with pride to his lighthouse, he unlocked a cabinet door from which he produced a little ladder for me to step up and check the lantern. All well, we locked up and made the long walk back to the village, before bidding me farewell until next year’s inspection.

So there it is

The Inspector of Seamarks is a quirky and unique role, and—like Marmite—very much an acquired taste. Many would not relish the miles on the road, the long unsocial hours, nor the numerous nights in franchise hotels complete with evening meal cloned from one town to the next. Nevertheless, the diversity of the role makes it so interesting and dynamic, with no two days the same. 2016 starts in February, first stop Cromer and the North Norfolk coast, I look forward to the adventures that await me this year. 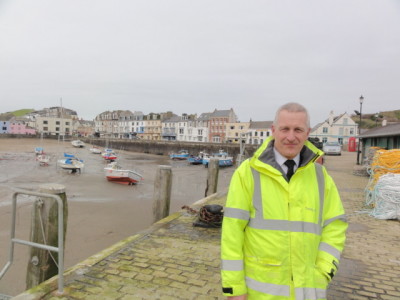 A career on course