‘A Light in Rhiw or Cilan – would be / A decent, beneficial objective / A prominent tower, a kindly building / A fair hearth, to display fire.’

Poet Ieuan Llŷn’s (1769-1832) call for a lighthouse at Porth Neigwl—on the south coast of the Llŷn Peninsula in North Wales—was one of a number of treaties for a light for the benefit of vessels that sailed the Irish Sea and St George's Channel in the early 19th century.

Recognising that a light was required to keep vessels to the west of the Llŷn Peninsula, Barstram Shoal and Bardsey Island, Trinity House built the 30.2 m (99ft) high Bardsey Lighthouse in 1821 on the southern tip of Bardsey Island (Welsh: Ynys Enlli); the light was first exhibited on 24 December 1821.

Historically it would have been of use with St Tudwal’s Lighthouse for vessels going to and from the ports of Pwllheli, Porthmadog and Abermaw but now provides a significant aid to navigation for recreational users in the northern section of Cardigan Bay.

The island, some two miles long by half a mile wide, is surrounded by outcrops of sharp rocks.

In 1825, Elder Brother Captain Edward Chapman Bradford (1764-1843) recorded his visit to the lighthouse as part of a tour of Welsh stations:

“On Monday 25th we left Cardiff for Brecon, Bualt, Rhayader and Aberistwith were we arrived next day and found the Bardsey tender ready to take us to the island. We left Aberistwith at four p.m. and landed at Bardsey at 5 a.m. the next morning 27th.

“The light house and establishment is excellent and is under the management of a Mr Goddard of Cannarvon who met us there. There are three tiers of lights, the two upper tiers are fixed lights consisting of five in each, and the lower tier contains six and revolves.

“We stayed at the island until 9 p.m. and then embarked in the tender, an open boat, for Aberistwith, were we arrived at ten o'clock on Thursday 28th. The Island of Bardsay belongs to Lord Newburgh and is inhabited by a few fishing families who also till the ground. The light house is the best constructed and the handsomest pillar I have ever seen and is built of Anglesea marble. The landing place is very confineded and dangerous, being a small cove defended only by broken rocks, and in gales of wind the whole coast must be terrific.”

The original illumination was by reflectors, but these were changed to a dioptric apparatus in 1838. The lantern dates from 1856; it is a chamfered octagon with rhomboidal glazing.

In 1873 Trinity House changed the fixed light to a revolving apparatus, at which time a weight tube was added, extending down to the second floor.

The revolving light gave a light character of five flashes every quarter of a minute.

Trinity House added a fog signal at Bardsey in 1878; seven years later John Jones FRGS reported on his impression of it:

“…there is a strange creature called the Fog Horn ­ its raucous sounds are meant to direct vessels in the fog. When it sounded, people said it could be heard for a distance of ten miles, and that against a moderately strong breeze. It sounds every five minutes, lasting for seven seconds each time. When it first began sounding the animals, especially the horses, could not understand what the matter was, and would raise their heads and listen, and refuse to work. But by now they have become used to it, and everything is as it was before.”

The oil lamp light source was changed to an electric one in 1973; the installation of generators for this purposes necessitated changing the fog signal from compressed air to electric emitters.

Trinity House automated Bardsey Lighthouse in 1987, at which time the keepers departed; it is now monitored and controlled from the Planning Centre in Harwich, Essex, with local support from boatman Colin Evans.

The station was solarised in 2014 as part of the drive away from continuous running diesel stations. A red LED lantern replaced the rotating optic.

Architecturally, the lighthouse is notable for being the tallest square tower lighthouse in the UK, and is made yet more distinctive by its red and white horizontal stripes.

Life on the island

Bardsey Island is owned by Ymddiriedolaeth Ynys Enlli / Bardsey Island Trust, which protects and promotes it as a place of special scientific, historical and spiritual interest.

The island is a Site of Special Scientific Interest and an Area of ​​Outstanding Natural Beauty.

The first abbey on the island was built in the sixth century; the island is reputed to be the burial place of 20,000 saints and as such was a prominent site of pilgrimage in years past.

The lighthouse keepers, although not native residents of the island, were nonetheless a part of life on the island and subject to the same challenges.

Mrs Aurelie Trezise—a daughter and later also a wife of Trinity House lighthouse keepers—recalled the story of her birth while her father was stationed at Bardsey Lighthouse in a 1961 edition of Flash:

“At the time of my birth in November 1903 my parents were stationed at Bardsey Island Lighthouse off the coast of Wales, at that time a land light. My mother had made full arrangements to go ashore at Pwllheli, on the mainland but, owing to continuous gales it was impossible for the small sailing boat to cross over in time.

“Hurried arrangements therefore had to be made on the Island which at that time had a population of around 45 people, but no resident Doctor. One of the inhabitants, a lady of 70 years of age, said she would come and act as mid-wife to my mother.

“The Island Veterinary Surgeon (who was really an amateur vet) said if things should go wrong he would come and do his best for her. As things turned out however, I was brought into the world safe and sound. I was told in later years that those happenings caused a great deal of worry and excitement on the Island.”

Because Bardsey is on one of the main bird migration routes it was common for birds to be attracted and confused by the light and subsequently collide with the lighthouse.

The lighthouse was one of almost half a dozen stations at which bird perches were erected circa 1913 on behalf of the RSPB; from 1978 a strip of land beside the lighthouse was floodlit by an imitation lighthouse to attract birds to the ground and get them to rest safely there. Unfortunately neither solution was able to completely mitigate the problem of bird attractions, but since the light changed to the red LED there have not been any reported attractions at the lighthouse.

In 2014, Trinity House modernised the lighthouse as part of its ongoing programme of improvements. The upgrade to the aid to navigation included switching out the catadioptric optic for an LED lantern; fortunately, the historical optic did not have far to go for its next home.

The optic—on loan from Trinity House—was unveiled at its new home on 26 June 2014 at a ceremony that marked the completion of the National Trust’s Porth y Swnt visitor centre at Aberdaron, funded by Visit Wales and the Welsh Government to celebrate the beauty, history and culture of the Llŷn peninsula.

“What better way to shine a light on Llŷn than to install a giant historic optic right at the very heart of our visitor centre. Changing a light bulb is never easy, especially when it weighs two tonnes. A team of National Trust experts painstakingly dismantled the huge optic and transported it over the sea by helicopter so we can preserve this important part of our history.”

Since the introduction of the Traffic Separation Scheme (TSS) Off Smalls and the TSS Off Skerries, the major shipping routes up St George’s Channel have become very defined and the light from Bardsey Lighthouse still provides a major aid to navigation for ships proceeding north.

For vessels going south through St George’s Channel, Bardsey Lighthouse provides a long range aid to navigation as the 18nm nominal range lantern is still visible to these vessels; when used in conjunction with South Stack Lighthouse or St Tudwal’s Lighthouse it provides an excellent position verification tool for mariners in the areas.

Trinity House maintains the prominent red and white bands of the daymark so that it remains conspicuous against the background of the island during the day. 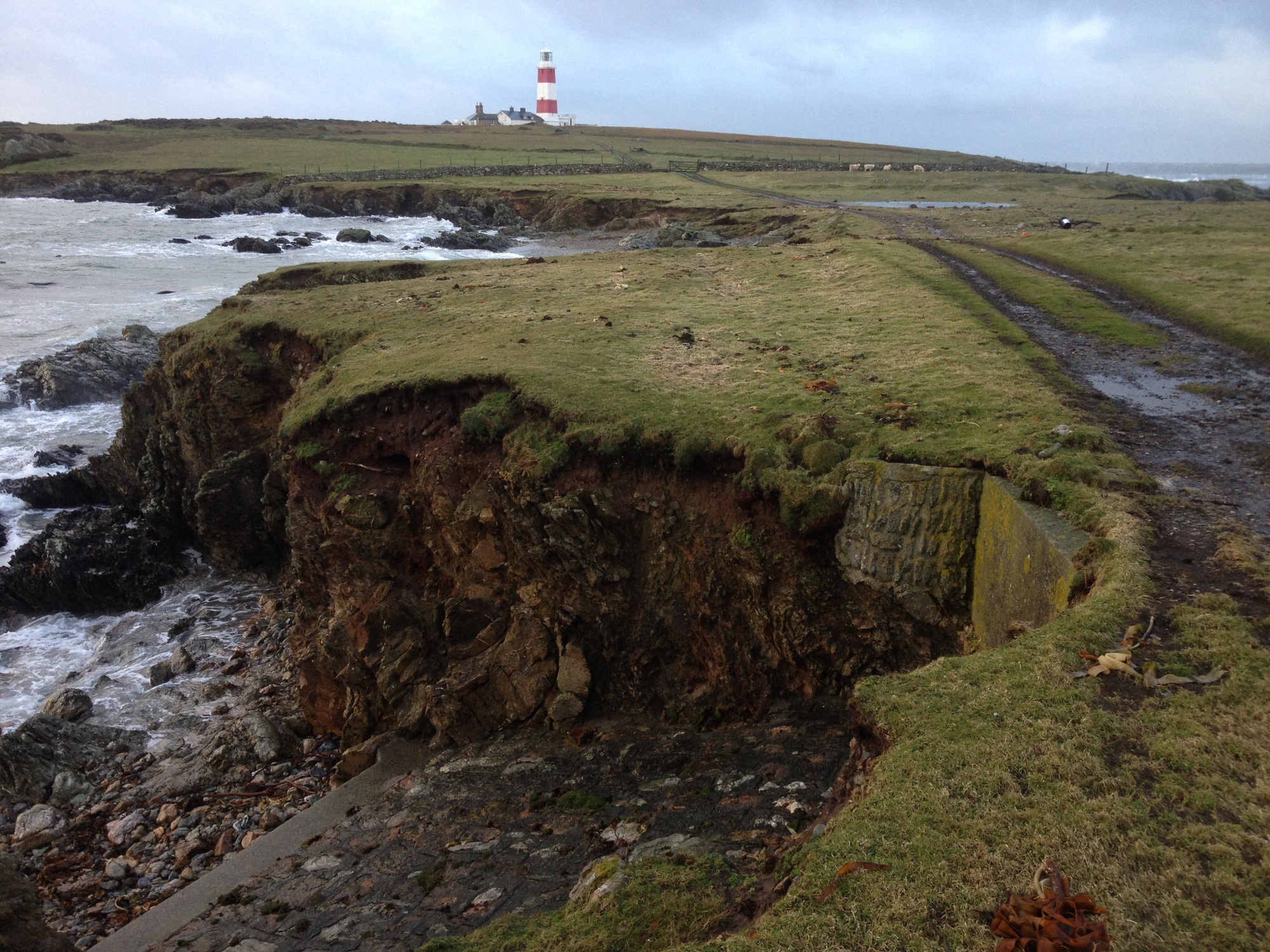 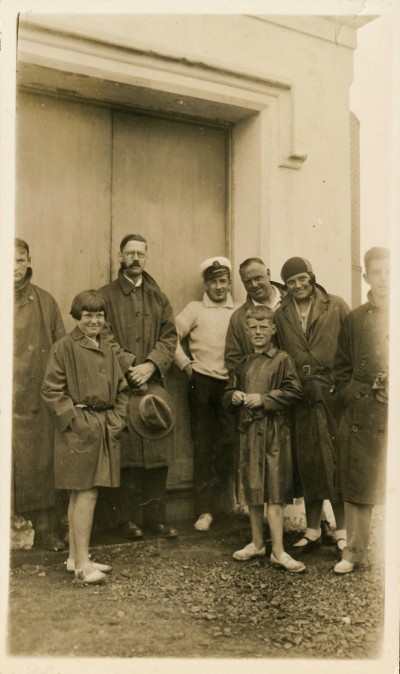 Visitors to Bardsey Lighthouse meet the lighthouse keeper in 1928 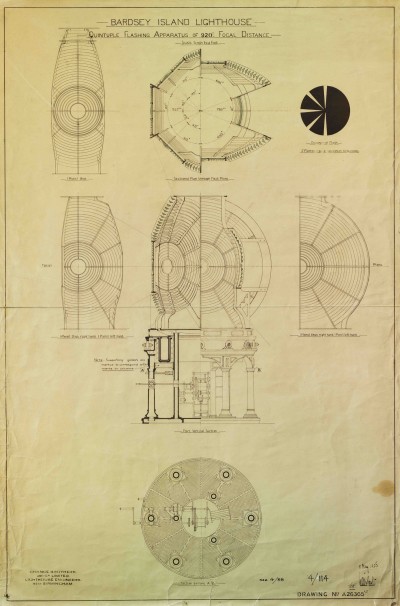 Bardsey Lighthouse was established by Trinity House in 1821; it marks Bardsey Island and is a waypoint for vessels north and southbound in St George’s Channel