6 June 2019 marks the 75th anniversary of the Normandy Landings, on 6 June 1944, also known as D-Day. To observe the occasion, the following extracts from the Trinity House archives document our involvement in wartime preparations and hopefully show the Corporation to be alert and steadfast even the most adverse of times.

Soon after the declaration of war in September 1939 the Admiralty sought out the services of Trinity House, requiring the exhibition of navigational lights and the establishment of buoys to mark swept channels.

Trinity House established 73 lighted buoys in various depths at given positions between England and France; the buoys were laid according to schedule and in spite of the weather. After the venue for the landings had been agreed a decision had to be taken as to the number of swept lanes and buoys required.

“Firstly, after the venue of the invasion had been chosen, the number of swept lanes required across the Channel and the number of buoys in each lane sufficient to meet ordinary conditions of visibility had to be decided upon. This would determine the number of buoys required, which would also give the depth of water of each buoyed position. With the foregoing information, the length of chain cable and the sinker necessary to hold these buoys in position could be determined.

“Secondly, the shape and colour of the superstructure that each buoy had to carry in order that these buoy positions could be identified was considered. In order that this identification could be carried out in hours of darkness, different characters of flashing lights were allocated. These were chosen so as to avoid confusion between neighbouring buoys.

“The work of preparing these moorings into their various lengths, preparing the buoys according to their appropriate colours, charging them with gas cylinders and assembling the lamps with their pre-selected characteristics was taken in hand.

“On completion of the above, the task of transporting them to the port of assembly was next to be considered, when it was found that the fighting services were all requiring transport to this same port, and all naturally demanding a high degree of priority for their requirements. However, the Admiralty released several LCTs [Tank Landing Craft] which were, about this period, making a passage within a few days of each other from east coast ports to the southward, and which they detailed to call at Harwich for the purpose of loading these buoys and transporting them to Cowes in the Isle of Wight.

“The next point to be considered on the arrival of these buoys and moorings at the port of assembly was the question of their storage, as they had to be kept immediately available and ready for service. With the heavy demand on every foot of quay space, deep water berths and shore lifting cranes, the answer to this problem was difficult, and as the LCTs had to be released as soon as possible for their other duties, it was decided that the Thames lighter [barge] should be used for this purpose of storage. Here again the question of priority was paramount, but 20 of these craft were allocated, together with three small tugs.

“These lighters were moored to buoys in the River Medina. The ocean buoys and moorings, according to their groups, were stored therein and then towed from there to the operating vessels as required.

“Six Trinity House Vessels—Patricia (Captain R Goodman), Warden (Captain J Le Good), Georges De Joly (Captain J R Meyrick), Alert (Captain T J White), Andre Blondel (Captain G Sherman) and Discovery II (Captain J J Woolnough)—were detailed to assemble in the Solent three weeks prior to D-Day, in order to be stored, victualled and loaded with their first consignment of buoys in readiness to mark the lanes for the assault forces and the subsequent passage of innumerable craft of every possible description necessary for an operation of this magnitude.

“After dealing with their load of buoys, these vessels would immediately return to the port of assembly and reload in readiness to sail on their second assignments. This operation was repeated until all the necessary buoys had been laid.

“These channels having been established and marked, it can well be understood that with the amount of traffic plying continually between the two coasts, collisions with, and mishaps to these light buoys would occur. Few would appreciate that the number of casualties amounted to 350 within the period of some four months, and at one time reached the alarming figure of 7.5 per day. This of course kept the Trinity House Vessels fully occupied in supplying and fitting spare parts or lamps, according to the nature of the casualty, and continually servicing the buoys in one way or another in order to maintain the lighted channels.

“The fact that the above laying and servicing was carried out without hindrance, and that later two fully-manned lightvessels were established off the coast of France, shows the complete mastery which our fighting services had obtained over the enemy, and more so when it is realised that swept channels were marked by light buoys close along the coasts of France, Belgium and Holland, up to the opening of the River Scheldt by the Allied Forces, and later along the coast and into the ports of Germany itself.”

During the three years prior to Overlord much shipping was diverted to the east coast ports; as the traffic to London was greatly reduced, over fifty London District Pilots undertook pilotage duties in the Clyde. Traffic in the Port of London increased again with preparations for the invasion and the responsibility fell on Trinity House for piloting all the commercial vessels and many of the service vessels engaged in those operations. All the Mulberry [portable temporary] Harbour Units which were constructed on the Thames were towed to their parking places under the supervision of Trinity House pilots.

In the month following D-Day nearly 3,000 ships were handled by 88 River Pilots and nearly 2,000 by 115 Sea Pilots. During that period many pilots worked day and night unceasingly without relief and pilots had to be recalled from the Clyde and the Royal Naval Reserve.

Juno (No. 72) Lightvessel was established on 18 June 1944 remaining on station until 27 January 1945 when she was towed to Le Havre for damage repairs following various collisions and heavy seas. One month later she was relaid in a new position at a station named Seine. On 3 March 1946 she was replaced by a French lightvessel named Le Havre and towed to Harwich.

No. 68 marked the Kansas station and was laid on 16 July 1944 remaining until 11 November the same year when she was towed to Ryde then to Cowes.

“I wish to place on record my High appreciation of the invaluable work performed by the vessels of Trinity House and their crews, as well as by those who have been responsible for the organisation and preparations ashore, during recent operations involving the landing on the Continent of Europe of the greatest seaborne expedition in History. The great success achieved was due in no small part to the contribution of Trinity House.

“2. The smooth way in which the buoy-laying has progressed has been in particular due to the work and splendid co-operation of your Superintendent at Cowes, Captain Barber. Without his willing help and advice at all times both before and during the operations the many problems which arose could not have been so easily overcome.

“3. Success is seldom achieved without loss, and it was with great regret that I learned of the loss of THV ALERT on 16th June. She had done fine work close off the enemy coast and it was most gratifying to know that none of her crew was lost.

“4. I shall be grateful if you will convey my appreciation to all of Trinity House.” 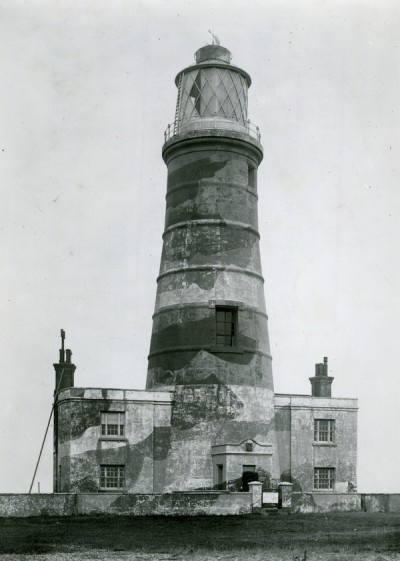 Orfordness Lighthouse as it appeared in 1942 with camouflage 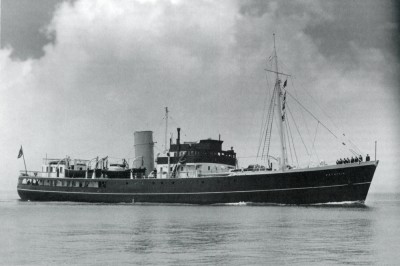