Cape Pembroke Lighthouse is situated in the South Atlantic on East Falkland Island. The Falkland Island Government is responsible for the repair and upkeep of the tower as a historical monument, which was badly treated during the 1982 conflict and had some superficial repairs (gaffer tape) to the dome and glazing.

Alison Barton is the Museum Manager with the Falkland Islands Museum & National Trust; she contacted Trinity House’s Lighthouse Manager Warren Clarke to ask for some assistance regarding specifications that we use on our lighthouses. This was passed to me and I was asked to survey the lighthouse and assist with the repair specification to be sent out to tender.

Alison arranged my flight through the Falkland Island Government and the RAF. I duly arrived on the Sunday evening for the flight, reached the guardroom only to find out the flight was to be delayed for 24hrs. The accommodation at RAF Brize Norton made Beachy Head Lighthouse appear luxurious but it was warm. My only mistake was leaving camp on an escorted pass; I nearly did not get back in!

The flight to Cape Pembroke was 20 hours with two hours for refuelling in the Cape Verde Islands. The flight was about half full so there was plenty of room to spread out, which was a good job because the second leg of the flight was another 10 hrs. They kindly produced a moving map showing how far you have left to go!

Alison met me at the airport; once she had dropped me off at the hotel for a quick shower it was off to the museum for a lecture on Conner O’Brien and his boat the Ilen. Very interesting it was too.

The next morning I visited the Falklands Public Works Department and was given a four wheel drive truck to get about in, so I headed off for my first sight of Cape Pembroke.

Cape Pembroke Lighthouse, built in 1854, is a prefabricated cast iron tower shipped out from the UK. In 1906 the tower was moved inland 200m to its present position. The Falkland Island Government (FIG) at present looks after the lighthouse, but they would like to pass it on to the museum. The museum would love to take it on but do not have the funds to repair the tower; this is where I came in. My task was to assist the museum and FIG to get the tower into a condition that the museum would be willing to take on.

After an initial meeting with the Museum and FIG teams I was given time to survey the tower. I considered my findings against the very comprehensive mechanical report which had been produced by Job Mtetwa, Design Engineer of the FIG.

On entry to the tower, it is clean and bright with white walls and a green staircase leading up to a watch room and lantern. There are very few original artefacts and the lens is badly broken with only the frame and a few fragments of the glass lens left.

The glazing is in place but now has various cracked panels. The lantern was re-glazed in the 1990s when it was also re painted by a local volunteer group, but not a lot has been done since 2000.

Going up I reached the tower dome roof. This is perforated in places and has been temporarily repaired with foil tape.

Overall it gave a good impression. These types of dome roof were formed using thin double rolled steel petals, which were through-bolted to a wrought iron frame. The framework and guttering are complete but until the tower can be scaffolded for repair the full extent of corrosion damage to the dome cannot fully be gauged. Its condition was helped by the low relative humidity of the Falklands, but coatings suffer due to the high UV radiation found at this latitude.

My findings were reported back to Job, Alison and their teams. I feel my main help has been in my technical knowledge of the construction of the tower and the materials used originally and in subsequent repairs. While we still have some of the construction drawings of the tower, these are quite hard to understand when viewed without the practical experience of dismantling and repairing the similar domes that we have in the UK. The coatings, which can be used for the protection of the tower, have vastly changed and improved over the years.

One of the great things that has been done to make access to the lighthouse easier is a hard track which has been formed to the end of Cape Pembroke, enabling an easy drive from Stanley.

It has been recommended that the cast iron sections should be repaired using a cold system involving stitching the plates back together with metal toggles. The worst of the damage was caused when the lantern was left with little glazing for a period of time. This allowed rain to pool at the tower base causing the concrete to expand; the glazing is now complete with minor damage. The roof dome looks to be sound but has no paint left on it, the good condition being down to the low relative humidity on the Falklands. The paint specifications that the FIG have for the lighthouse are a little dated so I recommended that they investigate the use of a product which Trinity House has been using. The final choice of paint product will depend upon the level of preparation that is possible to the cast iron as some of the existing paint will be bituminous, needing complete removal. The damaged glazing panels could be replaced in Perspex CC or glass. The dome, once scaffolded, should only need localised welded repairs. The lantern ventilator is constructed out of copper and in extremely good condition, with the small drainage holes at its base running clear.

The Falkland Island Museum is also well worth visiting, sat on the shoreline in Stanley and includes some great exhibits on Shackleton, radio telemetry and farming and a superb diorama of the local wildlife.

I did have some time to enjoy the sights of East Falkland Island, the highlights being a visit to see the King Penguins and being helped to find the grave of Frank Brookes, an uncle of mine. Also, the Queen’s Birthday Parade was a traditional British event with a chance to meet the Governor afterwards at Government House.

The trip ended with Alison and her husband John, the local Government’s Director of Natural Resources, taking me to a great local seafood restaurant. Many thanks to them for their hospitality. The trip back to the UK was easy, with no delays and the crew wanted to be home as well so cut an hour off the journey!

This article originally appeared in the autumn 2018 edition of Flash 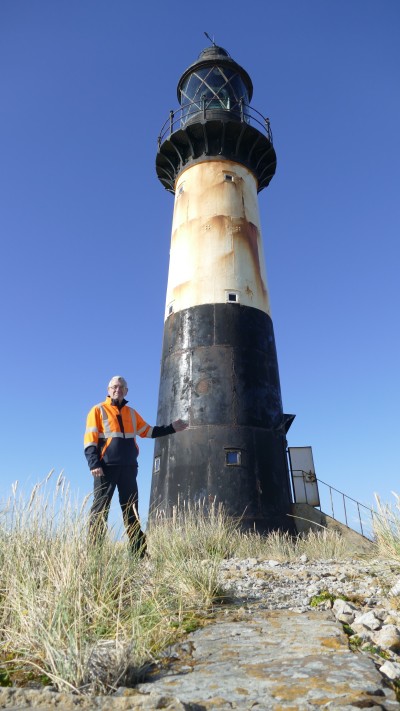