On 26 June twelve Naval Officers currently undertaking the Royal Navy’s prestigious Principal Warfare Officers Course at HMS Collingwood came to Trinity House in the blistering heat of our hottest day of the year to visit Trinity House as part of a broadening of their knowledge of the nautical administration of Britain. Hosted by the Navigation Directorate they also enjoyed a tour of the house and brief on both the navigational and operational work of Trinity House and also a talk explaining the fraternal organisation, history and charitable works of Trinity House.

The Royal Navy’s Principal Warfare Officer’s Course—while primarily intended to training up the future warriors of the Royal Navy—is also open to international officers, and they were represented on this visit by a French Officer and one Lieutenant all the way from New Zealand. Also among their ranks was Paul Walton, a First Officer in the Royal Fleet Auxiliary and former sea going officer of Trinity House. Paul—who started out in the Royal Fleet Auxiliary as a cadet—spent several years with Trinity House until the call for foreign ports sent him back to the Royal Fleet Auxiliary, where (I am sure thanks to his Trinity House experience) he quickly moved up the ranks and was offered a place on the Royal Navy’s PWO Course. It was of course his idea to visit Trinity House when the course instructors indicated a week of visits to London, to both show and tell his colleagues about the work, history and mysteries of the Master Wardens and Assistants of the Guild Fraternity or Brotherhood of the most glorious and undivided Trinity and of St. Clement in the Parish of Deptford Strond in the County of Kent, or Trinity House as it’s known to its friends.

On arrival the officers were greeted by the Deputy Master who as well as welcoming them to the house invited them to visit the Harwich Depot at some point in the future to take in the full Trinity House experience; he was also kind enough to insist that they relax their jackets and ties which was most gratefully and promptly done by one and all. Next came the tour by one of our expert City of London Tour Guides; I’m sure that almost no one alive is better informed about the history of Trinity House and its artefacts than Geoff the tour guide as every question posed by the visitors was instantly and expertly answered. The interest and surprise that followed each of his facts kept the tour entertaining and engaging even on this extremely warm day.

When the tour came to an end in the library Geoff was thanked by the officers and we proceeded down to the Prince of Wales Room for refreshments and briefs on the different aspects of Trinity House. It was noted that this was a warfare officer’s course and not a navigator’s course as several of the guests lost their way on the short journey down stairs. Once seated and refreshed with cold water, teas, coffee and biscuits thanks to Trinity House’s always excellent catering, Commander Graham Hockley gave a talk about the history, corporation, fraternity and charities of Trinity House and gave Geoff the tour guide a run for his money when it came to obscure and interesting facts. One that seemed to gain particular interest with the warfare officers was that Commander Hockley had been a marine engineer in his past life.

The Navigation Manager Captain Trevor Harris gave a presentation about the Navigation Directorate and the other works of Trinity House, which touched on its regular work with the Ministry of Defence on all things relating to electronic navigation and beyond. This was of particular interest to the officers looking to specialise as Principal Warfare Officers of the communications sub-specialisation. The brief concluded with a barrage of questions about the future of navigation and the powers of Trinity House before the class had to get moving to make their next appointment in Portsmouth.

The officers will spend the next five months completing their studies at HMS Collingwood before being dispersed around the fleet to consolidate their studies on-board the frigates and destroyers that makeup the back bone of the Royal Navy. They can choose to specialise in above or below water warfare or in all aspects of electronic warfare loosely termed ‘communications’. Once they have achieved full competence they will take up positions as PWOs ‘fighting the ship’ whenever and wherever required. If perhaps today’s visitors reach command and beyond in the future perhaps we will see some of them back at Trinity House one day in the fraternity, following in the footsteps of the many Admirals and Captains that have gone before.

This article originally appeared in the autumn 2018 edition of Flash 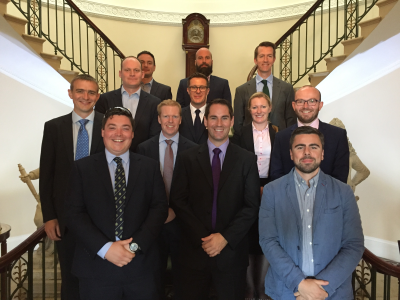 Take a tour of our Grade I listed headquarters

History of the Corporation

A brief history of the Corporation of Trinity House, from our origins to our 500th anniversary in 2014